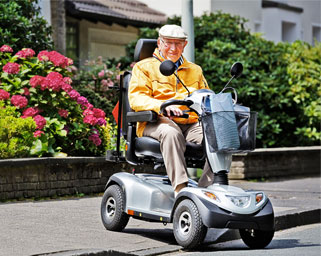 Stay comfortable and connected with mobility products, such as scooters from Wellwise. Not sure where to start? Our friendly staff are happy to help you based on your lifestyle, needs and budget. Don’t forget, there are many different provincial, national and third-party programs available to assist with funding.
Shop now

It’s easier and more effective to improve mobility the earlier you start.

Your routine can help you sort through features you will or won’t use.

Ensure your scooter is fully charged before heading out for the day.

Those with more limited mobility can ride independently, electric-style, with the help of a scooter. Our 3 and 4-wheel models offer a smooth, safe ride with various charging capabilities.

Looking for a scooter that will provide a shorter turning radius, while still being safe and stable? Consider a 3-wheel scooter.

With their wider wheel base, 4-Wheeled scooters tend to be even more stable and can handle larger weight capacities.

Add a personal touch with a beverage holder, increase safety with a blinking light, or find suitable replacement parts for your mobility product.

Perks of shopping with us.

Our friendly and welcoming staff can help guide you to products and specialized services that can help you meet your daily needs.

We help you take charge of the way you age with 40+ easy-to-navigate stores in Ontario, Alberta, and British Columbia. You can also shop our wide selection of health and wellness products online 24/7 at wellwise.ca

We offer free shipping to almost anywhere in Canada on online orders over $25*. Shopping for a large item in-store? In-store product can be delivered right to your door or to a Canada Post outlet, including those located inside Shoppers Drug Mart stores. For full details, we encourage you to speak with one of our staff in-store.

Earn PC OptimumTM points in-store, online, during points events and through personalized in-app offers. Spend your points at any one of our 40+ Wellwise locations across the country.

Yes. Our Certified Technicians can come to you or meet at your nearest Wellwise to provide you with a quote. While your product is under repair, take advantage of our rental program.

The PC OptimumTM program tailors your rewards to match the products that you buy most.

On the go? Use the mobile app to keep your PC OptimumTM offers in the palm of your hand. Literally.

1. To “redeem” means to use your PC Optimum TM points to pay, or partially pay, for eligible purchases by using your Card at the point of sale in Participating Stores or with Program Participants that offer redemption, following the instructions provided by the cashier, the point-of-sale terminal or other payment processing device. You can redeem the PC Optimum TM points you earn for eligible purchases, or for any other purposes of which we may advise you from time to time.

3. Redeeming your points at wellwise.ca is currently not available.