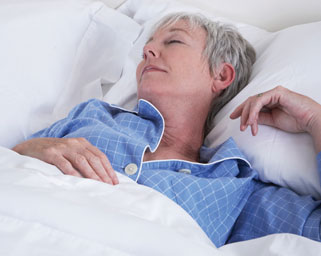 A good night’s sleep can play a huge role in helping your brain and body perform daily functions. Without it, you may begin to feel stressed or unfocused. If you’re in need of a better night’s rest, our Continuous Positive Airway Pressure (CPAP) products, sleep apnea solutions and sleep focused services can help you regain the energy to do the things you love.
Shop now

What is sleep apnea?

Sleep apnea can be a potentially serious sleep disorder that causes you to stop and start breathing repeatedly during sleep. There are three common forms of sleep apnea1:

Occurs when the upper airway becomes blocked during sleep, which reduces or completely stops airflow.

Occurs when your brain isn’t communicating with the muscles that control your breathing.

Don’t sleep on these symptoms.

Not sure if you or someone you know has sleep apnea? Knowing the signs is the first step. Over the next few nights, see if you can check off any of the following symptoms2:

Do these symptoms feel familiar?

If you checked off one or more symptoms listed above, talk to your doctor or healthcare professional, then visit a Wellwise™ location to speak with our Wellwise™ Sleep Consultants. Here are some of the ways we can help you get a better night’s sleep:

Appointments can vary in duration depending on the nature of the consultation. While we do try our best to accommodate walk-in appointments, it is recommended to schedule your appointment ahead of time.

Helping you get a better night’s rest with popular CPAP brands on the market.

We offer a range of CPAP mask styles that put comfort and fit first.

Some light maintenance is required to keep your CPAP equipment in good working order. We’d recommend following this schedule for best results:

Perks of shopping with us.

Our friendly and welcoming staff can help guide you to products and specialized services that can help you meet your daily needs.

We help you take charge of the way you age with 40+ easy-to-navigate stores in Ontario, Alberta, and British Columbia. You can also shop our wide selection of health and wellness products online 24/7 at wellwise.ca

We offer free shipping to almost anywhere in Canada on online orders over $25*. Shopping for a large item in-store? In-store product can be delivered right to your door or to a Canada Post outlet, including those located inside Shoppers Drug Mart stores. For full details, we encourage you to speak with one of our staff in-store.

Earn PC OptimumTM points in-store, online, during points events and through personalized in-app offers. Spend your points at any one of our 40+ Wellwise locations across the country.

After you’ve received a prescription from your doctor, call your nearest Wellwise to make an appointment with a sleep consultant.

CPAP stands for Continuous Positive Airway Pressure. A CPAP machine sends air through a tube at a steady pressure. The tube leads to a mask secured on a person’s face. This airflow keeps the airway open, so individuals can sleep without having their breathing interrupted.

Yes, you should use CPAP therapy every night. Remove water from the humidifier chamber before travel, and consider your power source if you are visiting a different country. Always check with your airline about their specific requirements.

Talk to the doctor who prescribed your CPAP therapy and ask them for assistance.

The PC OptimumTM program tailors your rewards to match the products that you buy most.

On the go? Use the mobile app to keep your PC OptimumTM offers in the palm of your hand. Literally.

1. To “redeem” means to use your PC Optimum TM points to pay, or partially pay, for eligible purchases by using your Card at the point of sale in Participating Stores or with Program Participants that offer redemption, following the instructions provided by the cashier, the point-of-sale terminal or other payment processing device. You can redeem the PC Optimum TM points you earn for eligible purchases, or for any other purposes of which we may advise you from time to time.

3. Redeeming your points at wellwise.ca is currently not available.